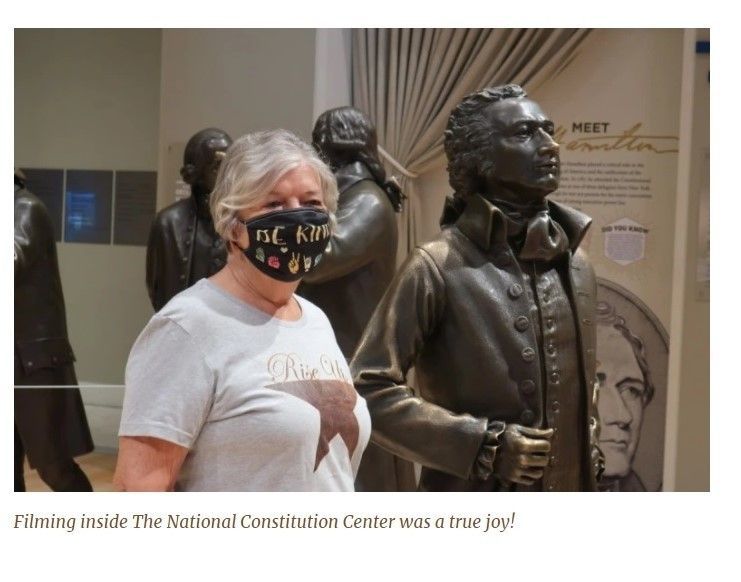 In August of 2018 we (son Joe, husband Tom and I) decided on a plan to travel to New York to see Hamilton as a comforting distraction over the Christmas Holidays. Ron, as most folks know, left on Christmas morning and each year we honor that day in a special way. During that season between Thanksgiving and Christmas, I read the book Hamilton by Ron Chernow, studied the music and, paying close attention to the lyrics, discovered how closely the lyrics followed the flow of the book.

Throughout my life I’ve been a student of music lyrics, so I was especially intrigued by the brilliant rhythmic use of language presented in the art form of rap.

I decided to memorize about ten lines of the opening song, Alexander Hamilton, and perform them for a gathering of my women friends later that year. In the beginning, they were a bit wary at first, but when I finished, they stood and applauded. I was hooked! Fast forward to 2020, the pandemic took hold. Just after that, I learned that the Philadelphia Protestant Home (PPH), where we live, was planning to have a virtual talent show (usually live) so I decided to learn the song in its entirety to perform for the show. We edited the official instrumental from the musical Hamilton to make this track. It was a gamble because they could have removed it from social media, but it looks like they approved of it, because they are leaving it up!

I asked Joe to take a phone video of me rapping Alexander Hamilton, which I would have been perfectly happy to post on Facebook and elsewhere. However, Joe, being a music producer with a studio, quickly developed a larger vision, believing that if we are going to put out a video, we should make the best presentation we can produce. And so, the video became our pandemic project.

Doing this work has brought an enormous amount of comfort to us. Joe, Tom and I have had so much fun! I believe it is a gift from Ron to us, as it is all wrapped up in strategies to help us manage our grief and loss as well as bringing us to a fuller life expression. It has made us sing and laugh, dance and visit historical sites. Finally, this is the ultimate expression of true, unbound, joyous patriotism!